For 6 years since November 2011, AMURT UK has served food to the homeless on a weekly basis, in central London. The initiative started and grew from Occupy London, which established a temporary camp outside St Paul’s Cathedral between October 2011 – February 2012. The camp housed members of the public including many homeless. Once a week AMURT UK prepared and brought food to the kitchen for the camp residents and visitors and accompanied this with their live and uplifting music. By the summer of 2012 the camps had been evicted and AMURT UK started their programme at Lincoln Inn Fields, where we have remained serving food each week to this day. 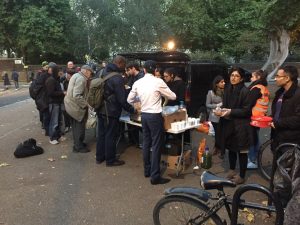 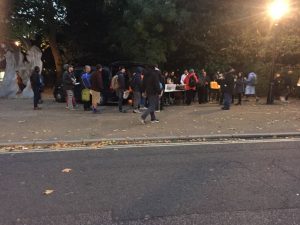 Donate Now and make a difference to someone’s life forever

Whether providing free meals to the homeless, teaching low-income families to cook healthy meals or sending grants to crisis relieving projects abroad – your money goes straight to where it’s needed most.

We work with local communities to relieve immediate suffering in times of disaster and crisis and empower people to lead healthy, happy, environmentally sustainable lives.